Meny
Logga in
Registrera
Install the app
You are using an out of date browser. It may not display this or other websites correctly.
You should upgrade or use an alternative browser.

"In 2003 the ice hardening method was replaced by TEGIMENT Technology for two reasons: firstly because the corrosion resistance caused by the ice hardening deteriorated on contact with perspiration and salt water, and secondly because the treated parts had a strong tendency to become magnetised, which can have a negative impact on movement components which are vital to the watch's correct functioning."

I have often wondered about the various steel hardening process used by Sinn, Damasko and Bremont. Would appreciate comments on what it comes down to day to day use of a watch. Which one looks better, can take blows/nicks better and how do they compare with DLC :-s I know the Henckel knives I...

"The Damasko ice-hardening is a complex process. I haven't yet seen it described anywhere on the web, so here it is: First the metal is heated to above 1000°C, then rapidly quenched to room temperature in oil. This is followed by deep freezing at – 80 °C for 1 hr, then tempering for several hours at 160°C to give hardness >710 HV. The Pitting Resistance Equivalant is 30 points which is similar to 316L. The nickel-free composition is great for people with allergies."

Goflorp skrev:
"The Damasko ice-hardening is a complex process. I haven't yet seen it described anywhere on the web, so here it is: First the metal is heated to above 1000°C, then rapidly quenched to room temperature in oil. This is followed by deep freezing at – 80 °C for 1 hr, then tempering for several hours at 160°C to give hardness >710 HV. The Pitting Resistance Equivalant is 30 points which is similar to 316L. The nickel-free composition is great for people with allergies."
Klicka för att se resterande...

It has always been a major goal of Damasko to design a watch case with superior resistance against scratches, knocks, and general wear, but the materials commonly available, including the rather soft titanium definitively do not feature the necessary characteristics. The term 316L describes the kind of steel which is predominantly used in the watch industry. It features good corrosion resistance but is also relatively soft. Occasional knocks with a watch made from this material will often lead to serious scratches or dents.
Although there is the possibility to harden the surface of 316L (1.4435) or 1.4301 up to 1200 Vickers by diffusing carbon into the top layers of the steel, there is no way to temper the material. Due to the austenitic structure of the alloy it is impossible to make sure that that steel retains its hardness throughout the body.
Various tests have proved that this kind of surface treatment is not suitable for Damasko watches because it only hardens the top layer of the metal. This leads to the so-called egg-shell effect. An ordinary pair of tweezers are able to dent and scratch the “hardened” surface (which are normally made from spring steel) because the material underneath the hard layer was not able to withstand the pressure.
Due to the reasons described above Damasko searched extensively for better alternatives. In 1994 after five years of research they took out patents for 20 closely related martensitic sorts of stainless steel which highly exceeded our expectations. They are absolutely nickel-free, offer a good corrosion resistance, and can be tempered up to 64 HRC/800Vickers which is four times the hardness of every other steel currently used in the watch industry.
What makes this material so special is the fact that the molten steel is enriched with 0.35% nitrogen under high pressure. Nitrogen and carbon are responsible for the hardness of the alloy. Under normal circumstances it takes about 1% of carbon to temper a martensitic steel up to 60 Rockwell but the low nitrogen content of our steel only requires 0.35% of carbon to achieve this superior hardness and in addition to that leads to an excellent corrosion resistance which is many times higher compared to other temperable martensitic steels. Due to the special process of hardening Damasko calls this steel “ice-hardened, nickel-free stainless steel”. This material is patented for their applications and Damasko makes exclusive use of this pioneering material.
The entire watch case, including hardened crown and pushers is designed, engineered, and machined at the Damasko factory near Regensburg. Until the end of 2002 Damasko supplied their cases to a well known German watch brand but from then on, the cases are only available through Damasko. After the special heat treatment mentioned above Damasko steel reaches a maximum hardness of 62 Rockwell which makes it superbly scratch-resistant. You have to search hard to find a common household item ( apart from a sapphire nail-file or a brick) that is able to scratch the case.
Due to its superior performances this steel was mainly created for aeronautical use in:
The use of this steel in watch cases is patented by Damasko.
Klicka för att se resterande...

Due to the fact that Damasko are well known experts on stainless steels and their metallurgical aspects, the company is often approached by watch enthusiasts and customers from all over the world. And more or less all of them ask the same questions: Which steel used for watch cases offers the highest corrosion resistance, and which one features the greatest hardness? Which company offers the best choice? Although it is possible to answer this question in one sentence, it might be of greater interest to compare the most commonly used stainless steels with each other, including one of the Damasko steels. For the Damasko watch range a highly corrosion resistant austenitic stainless steel alloy which can be fully hardened was chosen, leaving the surface with a key hardness of 1600 HV (Hardness Vickers). Just to give you an impression how hard this actually is: Titanium 180-210 HV, St. Steel AISI 316L 190-220 HV, Sapphire crystal 2000 HV. In order to compare Damasko steel with other commonly used stainless steels, Damasko choose to measure the PRE-factor (Pitting Resistance Equivalent). This can be done by defining the ratio of three important alloy components, using the following formula:
PRE = %Cr (Chromium) + 3.3 x %Mo (Molybdenum) + 30 x %N (Nitrogen)

This leads to the following results:

The above table perfectly illustrates the superior corrosion resistance of Damasko steel.
By the way: Since most quality watches are made from 316L they don’t offer real salt water resistance, so always make sure to rinse your sports/dive watch with fresh water after open water swimming or diving.
Klicka för att se resterande...

The feeling of weightlessness, the fascinating underwa ter world and the mysterious depths always centre around time. The DSub50… 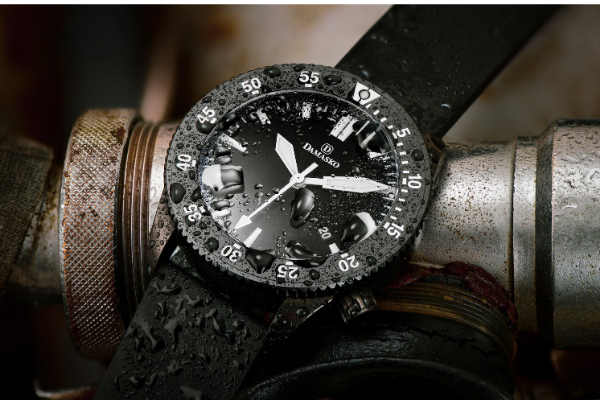 The feeling of weightlessness, the fascinating underwa ter world and the mysterious depths always centre around time. The DSub50… 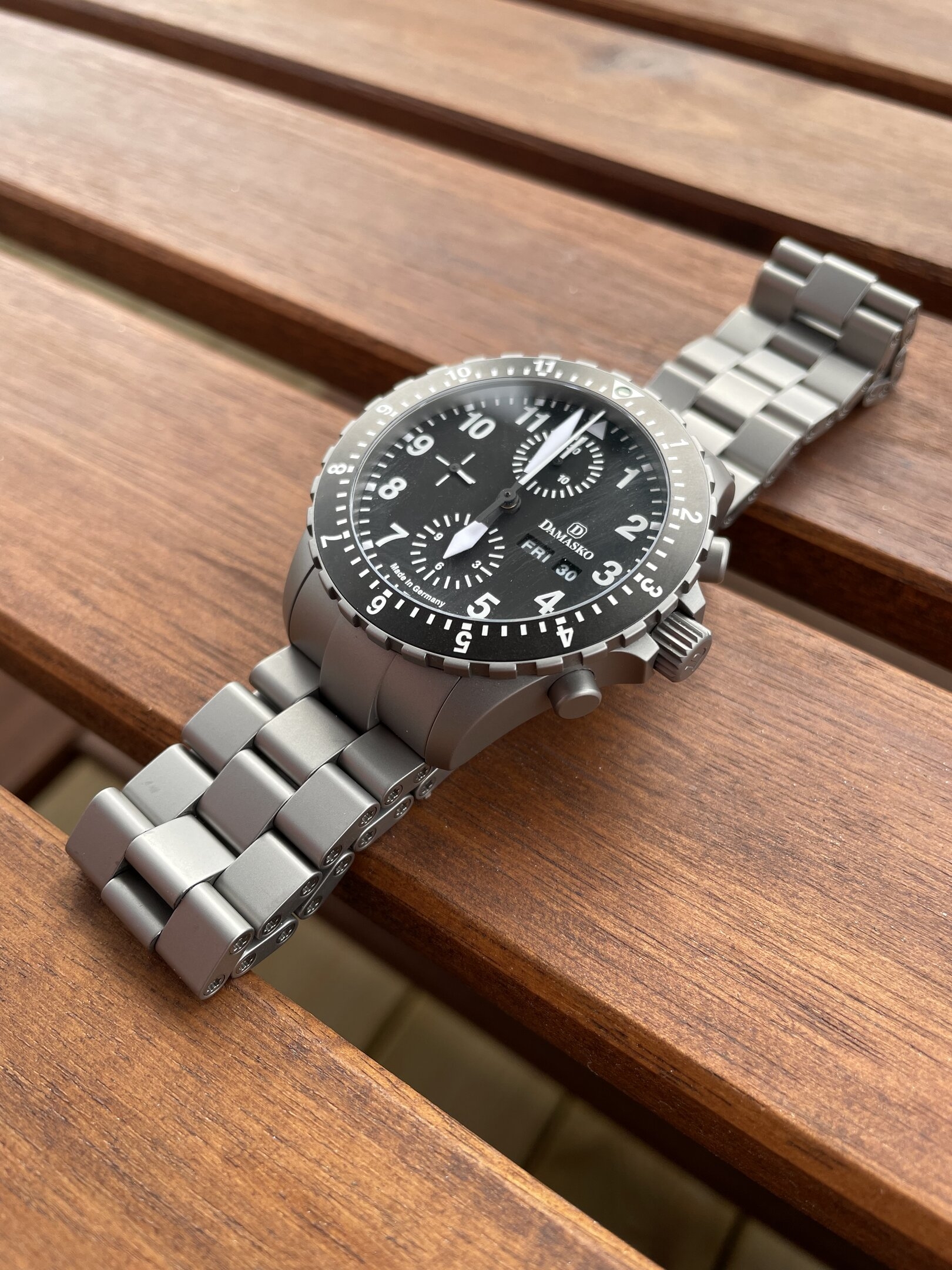 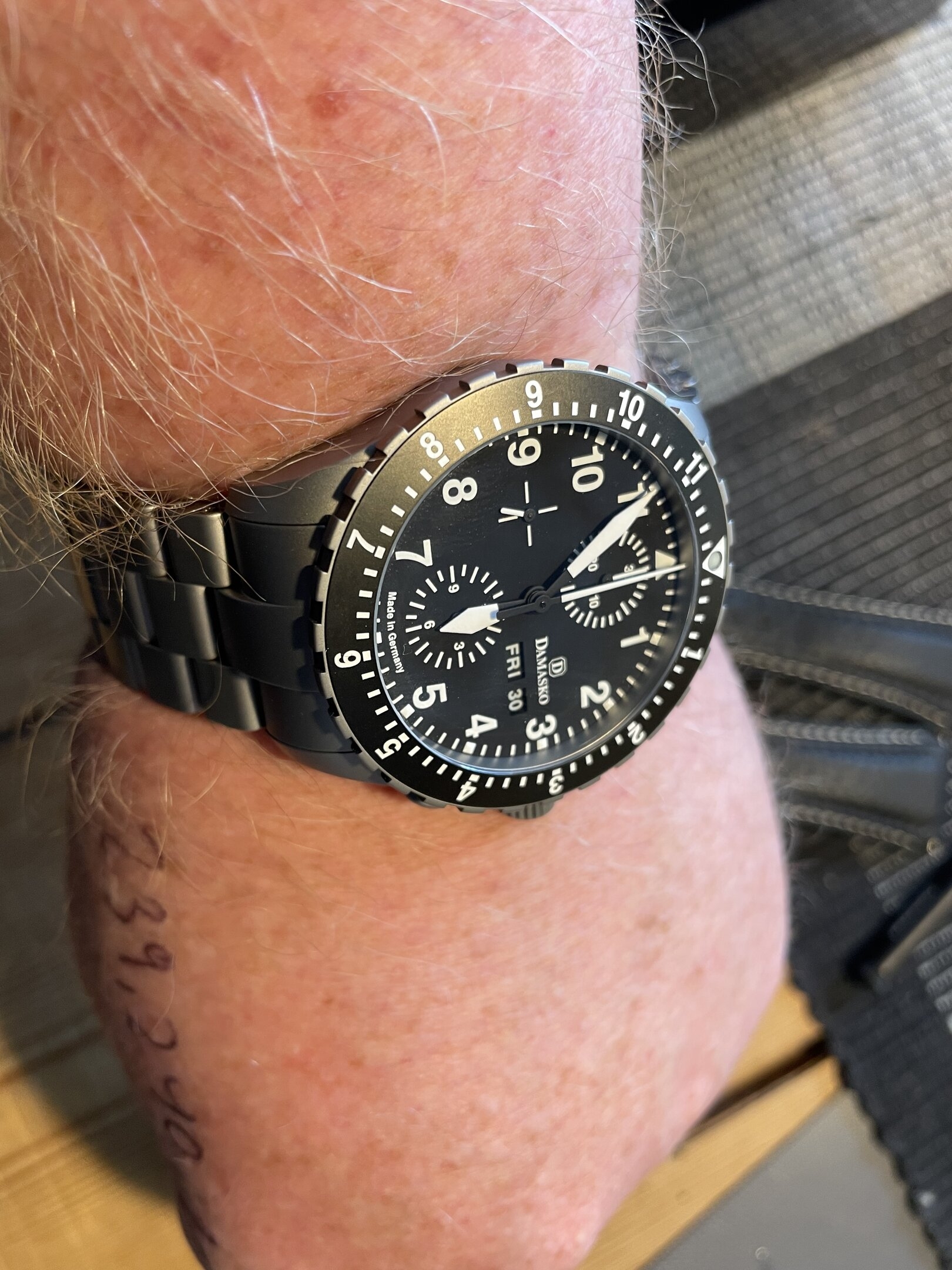 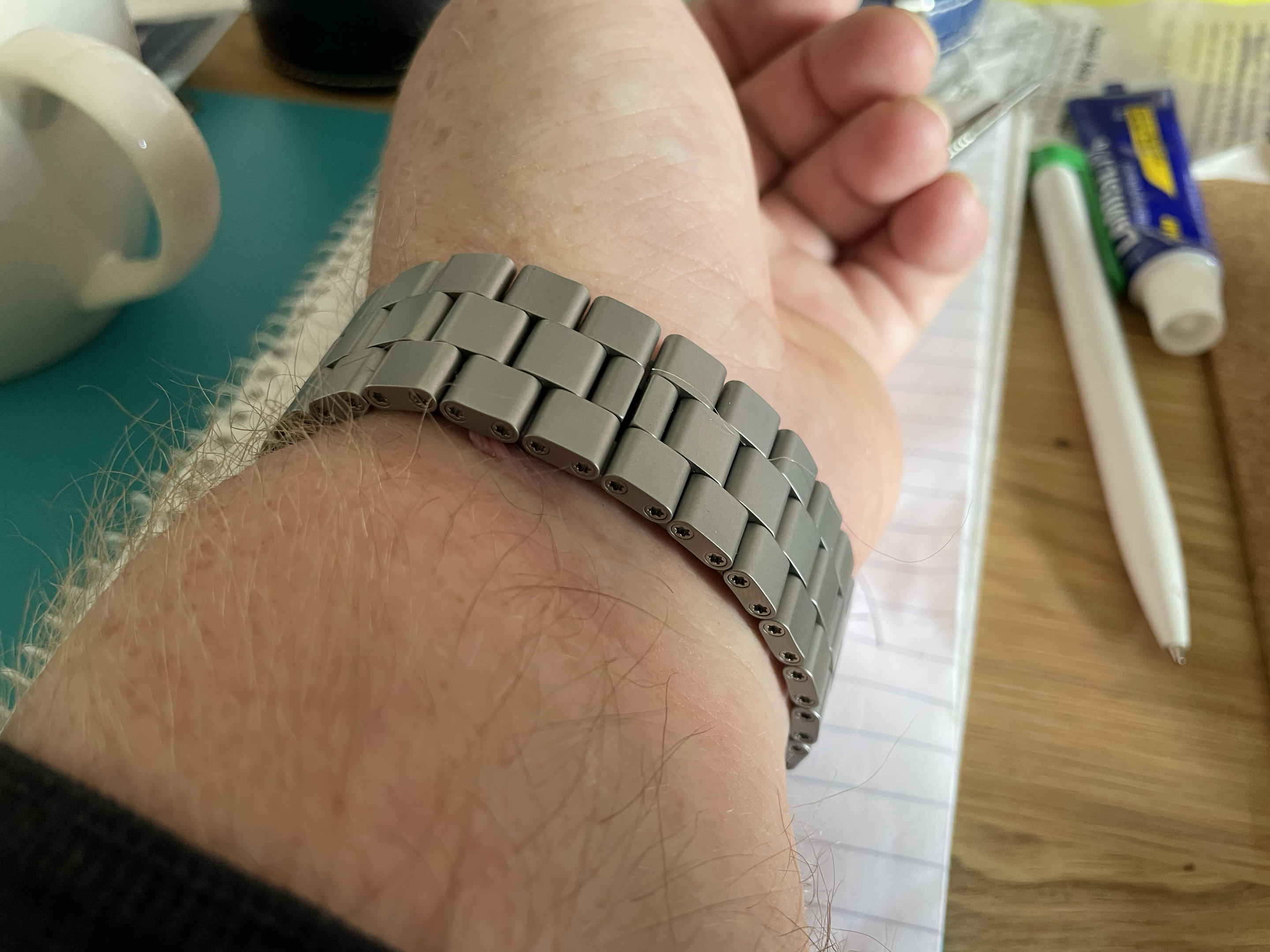 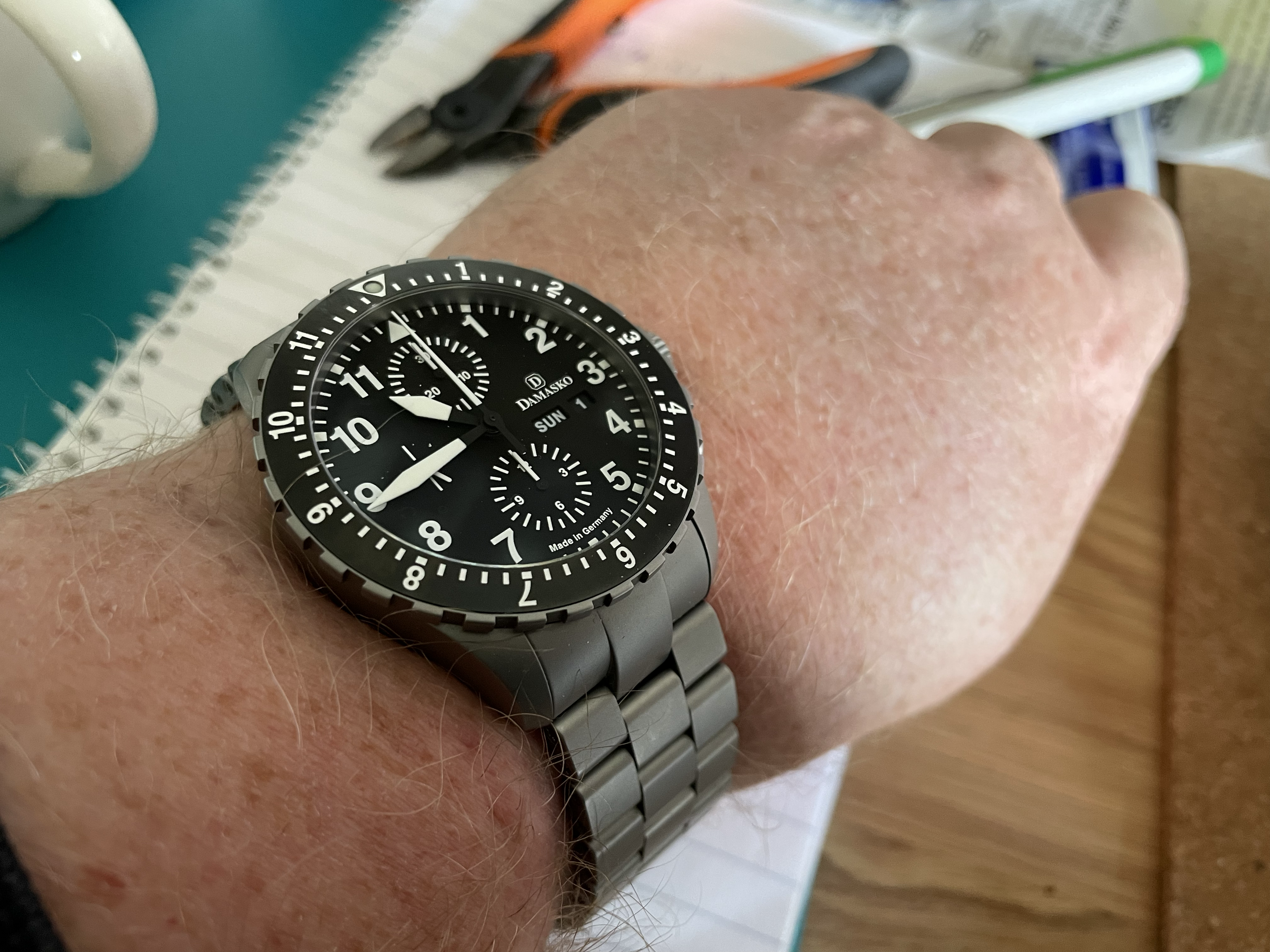 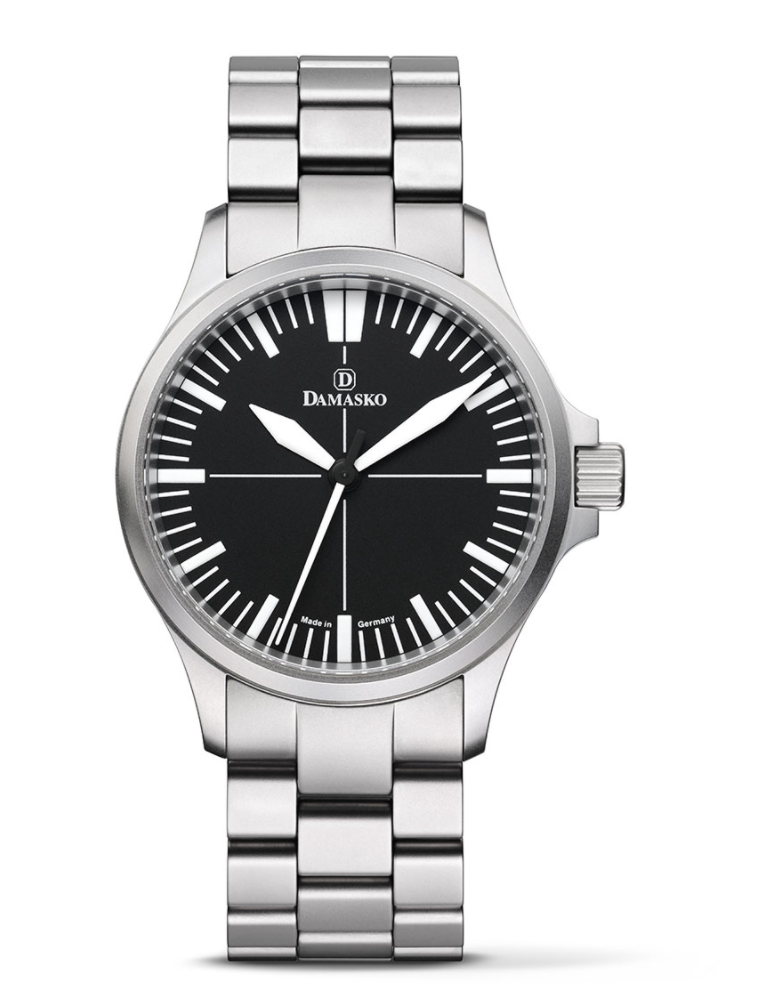 ”To flipp, or not to flipp, that is the question?”…..no, not just at this point! 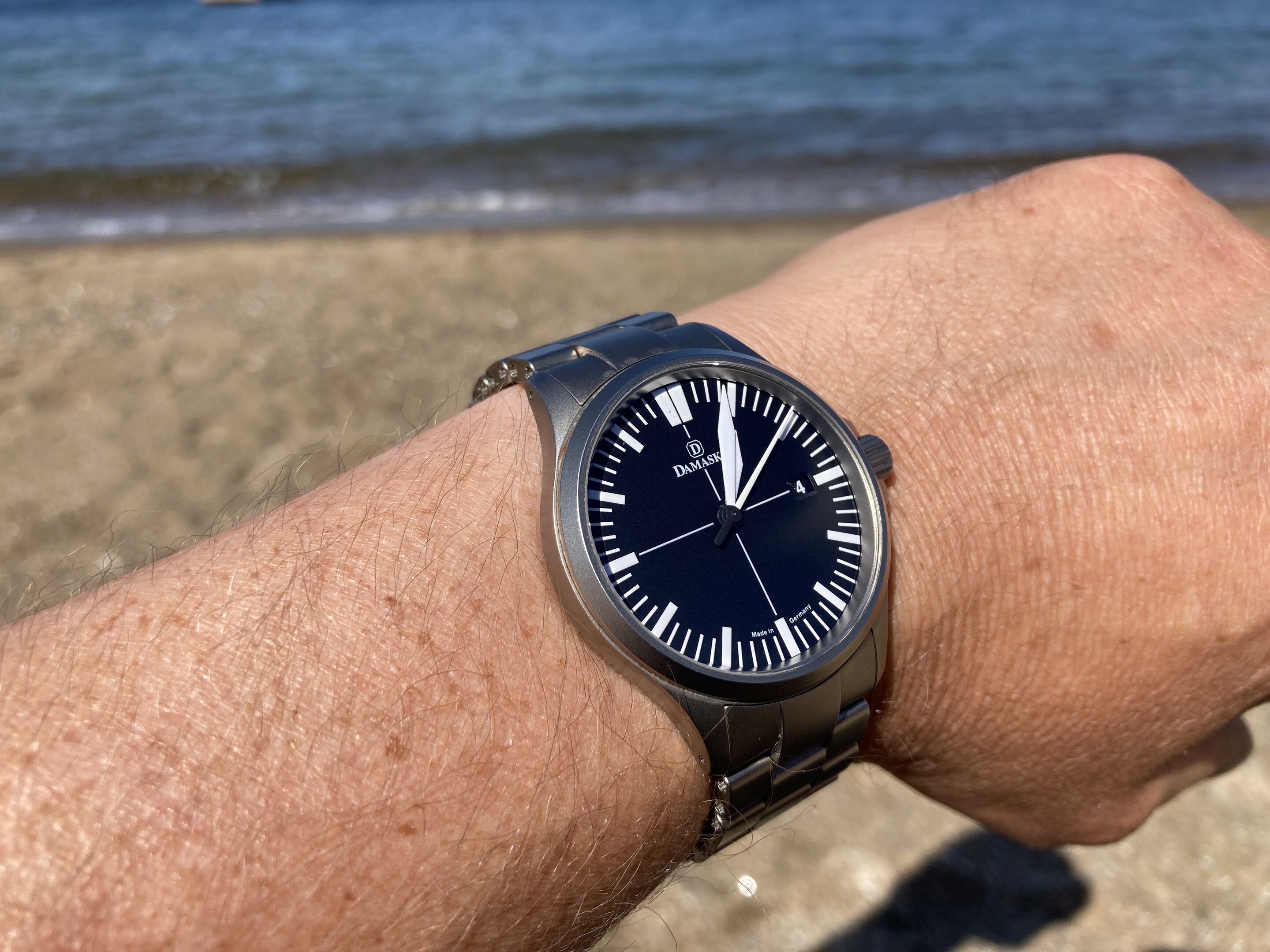 henno3 skrev:
”To flipp, or not to flipp, that is the question?”…..no, not just at this point!